This week as part of their regular Twitter poll the lovely chaps at The Beer O’Clock Show asked a rather interesting question: 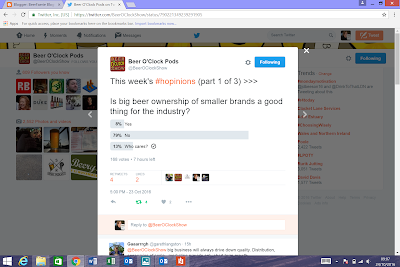 After consideration I have voted “Who cares?” and following a couple of slightly badly phrased tweets to try and argue this point and a failure to fit my thoughts into 140 characters I hope the below will explain my thinking.

Yes, I’m sure that the input of big beer can effect quality in a negative manner however I feel strongly that the assumption that this is always the case is short-sighted at best.  It works on the theory that all “big beer” is bad and all “small beer” is good which is simply not the case.   I’m sure that in some cases a “big beer” takeover has had negative effects but there are also ample reasons to be believe it could have a positive effect as well.

More capital and better infrastructure can surely have a very positive effect – better ingredients at lower prices, more consistency, good beer available to more people (although clearly those poor uneducated souls who choose to buy discounted beer in Tesco’s don’t deserve anything decent as they slowly erode “craft” beer bottle by bottle…), better logistics, higher turnover of product meaning fresher beer for the consumer, more marketing spend increasing awareness (although presumably if you’re the person who needs marketing to be made aware of a beer you too don’t deserve to drink it), bigger lab facilities for better QC etc etc.  The list goes on.  I am not for a moment saying that smaller breweries don’t already have these things or that being made in a smaller brewery means that QC etc would be lacking, I am purely trying to point out that there can be positive as well as negative effects.

Whenever takeovers, investment or mergers are discussed the phrase “selling-out” seems to be bandied about with gay abandon.  It’s an interesting concept.  Are we saying that brewery owners aren’t allowed an exit strategy or to try to grow their businesses?  That having worked for years to build a business that someone would want to purchase they should refuse the money because otherwise they will be stripped of their craft colours and be condemned to drink nothing but the latest reincarnation of Watney’s Red Barrel for the rest of their lives.  You never know, the beer could taste good and they get to sit happily for the rest of their life basking in the security of money in the bank – not bad.  What if a medium sized local brewery invested in or purchased a smaller brewer who was struggling to grow and could do so under their umbrella with help and support.  Would that still be considered selling-out?

In any other business sector growing to be so successful that you can float or sell your business would be seen as a great achievement, in beer it’s seen as making a deal with the devil.  Do I think that selling a major share in your business weeks after promising that would never happen is a good way to behave?  No, not really, but maybe pressure from the industry, bloggers, customers and beer-communicators compels people to say what they think we want to hear.  Just a thought.
So what are the alternatives?  You want to grow your brewery or get out and enjoy the rest of your life but don’t want to be hunted through the street with pitchforks by an army of angry beer drinkers who have survived on nothing but hops and haziness for the past three years? You could sell privately to another individual.  To my mind this probably has a higher chance of influencing the quality of the beer but it’s less likely to cause Twitter uproar.  You could seek investment from banks, individuals or investment groups but that could increase pressure for increased profit, cost-cutting and business growth – the exact same things which many people who have voted yes to the poll cite as the things which would eventually cause beer quality to deteriorate with a “big beer” takeover.  I’m not a business expert, I don’t have the answer.  I also don’t think it’s my place to judge how others run their businesses.

Maybe we should have a little more faith in the people whose products we have admired for so long.  It’s possible that they might actually know what they are doing.  Surely if anyone is going to care about what happens to their beers it’s the person who created them in the first place.

To me whether beer is good or not has nothing to do with who it’s owned by and everything to do with how it tastes.  If it’s well made and tastes good (no brewing taints etc) then all is well in the world.  As far as I’m aware there isn’t a tasting note lurking in the far dark corners of Untappd which reads “Juicy hops, balanced sweetness but with an overwhelming sense of buy-out bitterness”.  Does the beer taste good? Great!  Does the beer taste bad?  Not so great.  Simple.   And if you don’t like it, drink something else.

There will be two more Beer O'Clock polls this week, look out for them on Twitter at @BeerOClockShow, check out the Beer O'Clock Show blog here and subscribe to the podcast on the device of your choice,  it's well worth it.
Posted by Ruth at 01:21